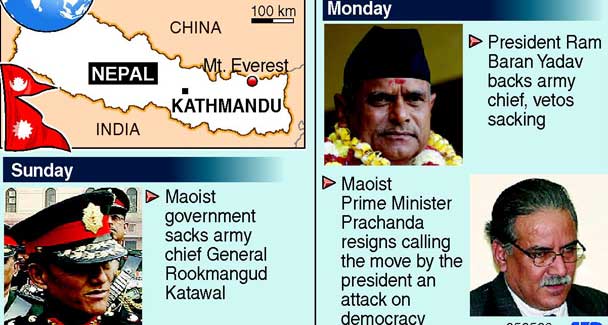 consensus government by Saturday. Lessthan one year ago, he had given the same call when the historic constituentassembly elections were over and the Maoists emerged as the biggest party yetfell short of majority and could not prop up a government on their own. ( Watch )

Atthat time too the 25 parliamentary parties had failed to come up with aconsensus government, forcing the President to order the next alternative:holding an election in the 601-member interim parliament and electing a newprime minister on the basis of simple majority.

Now the plot remainsthe same, only the characters have become interchanged. The Maoists are now inthe opposition and have outright rejected the presidential directive, insteadvowing to keep up a street and house battle to unseat him as well as army chiefGen Rookmangud Katawal, the bone of contention who led to the unravelling of theMaoist government on Monday.

The interim parliament, paralysed in thepast by the opposition Nepali Congress (NC) party, on Tuesday saw theout-of-power Maoists take their place. The house had no hope of conducting itsbusiness as the largest party in the house stormed the rostrum, raising slogansagainst the President and condemning his "unconstitutional move" of reinstatingthe army chief, Gen Rookmangud Katawal, whom the Maoist government had sacked onSunday.

"We demand the revoking of the unconstitutional step and willnot allow the house to sit till it is done," the chief of the Maoists'parliamentary party, Narayan Kaji Shrestha Prakash, said.

The Maoistsalso boycotted the all-party meet called by its former allies, the CommunistParty of Nepal-Unified Marxist Leninist (UML), that is now trying to form a newgovernment with the support of NC.

In a surprise twist, even theMadhesi Janadhikar Forum, the fourth largest party and a critical ally for theformation of a new government, also stayed away from the UML-called meeting,raising serious doubts about the Saturday deadline.

If the deadlinefails, the president will have to call an election in parliament to choose a newprime minister. Last August, Maoist supremo Pushpa Kamal Dahal Prachanda had wonresoundingly trouncing NC candidate Sher Bahadur Deuba. This time, it would beimpossible to hold the election if the Maoists continue their war on thehouse.

Throughout the tension-filled day, Maoists kept up protests inthe capital as well as outside districts. They received a shot in the arm fromleading human rights activists who tried to hold a protest rally in front of thepresidential office and were detained by police for some time.

In yetanother dramatic move, Inhured International, a human rights organisation,joined the protests against the president, taking him to court. On Monday, theNGO had filed a writ in the Supreme Court, asking for a stay on thereinstatement of Katawal. Judge Balram KC on Tuesday began hearing thepetitioners watched by the entire nation.

If the court pronounces aquick verdict that would probably be the best way out of the growing crisis. Averdict in favour of the president would force the Maoists to tone down theirprotests as otherwise they would be seen as a party with no respect for thejudiciary. If the court says Yadav acted unconstitutionally, it could lead tothe exit of republic Nepal’s first president.