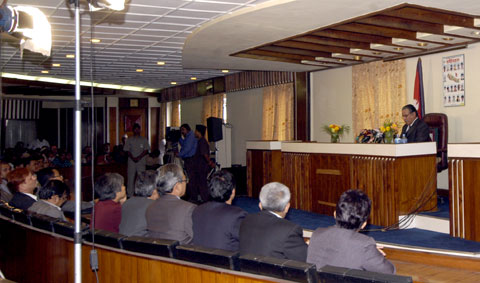 Prime Minister Pushpa Kamal Dahal announced his resignation Monday, blaming President Dr Ram Baran Yadav for creating a parallel power center against the popularly elected government. “There is an urgent need for ending the dual regime created through unconstitutional measures,” he said in his televised address to the nation Monday afternoon. “The whole country needs to be united against such a move." He said he is stepping down to end this uncomfortable situation and create a conducive atmosphere for safeguarding endangered democracy, nationalism and peace process. The prime minister attributed the failure of his government to non-cooperation of the ruling coalition partners and conspiracy hatched by opposition parties and foreign forces.

Dahal said the united moves of a number of political parties and forces against democracy and peace process has become grave concerns of safety of the country’s nascent democracy and peace process. “The genuine democratic parties have a time to pay special attention toward the fact that some of the political forces prepared grounds for the unconstitutional move of the president by spreading rumor about Maoists’ plan to capture state powers. “The move taken by the president under provocation of some political parties is unconstitutional and undemocratic,” he said. “The interim constitution has not given right to the president to act independently without recommendation of the cabinet.” “There is no power to the constitutional president to become a parallel force,” he said. “Whoever has provoked the first elected president of the republican Nepal to do such unconstitutional meddling on the issue of establishing civilian supremacy is a blatant attack on democracy, he said. The prime minister said there are conspiracies being hatched against the achievements gained after a long struggle and sacrifices. He said his party bagged clear majority in the direct election and became the largest party in the proportional representative system in the Constituent Assembly elections. “But our party was barred from leading the government for four months,” said Dahal.

.He blamed the CPN-UML, without naming it, for creating obstacles from inside the government itself. He said the people were denied immediate relief because of the hurdles from inside and outside of the government. He said the government was cornered by various quarters of the society to stop it from implementing people´s agenda. He said he was forced to accept the blames for being indecisive. Giving references of 1960 and 2001 coups, he said there were still chances of action from reactionary elements. He also accused the president of breaching his constitutional limitations. He said some political parties provoked the president to create his position as a parallel power center. He blamed the UML for first giving consent to the government to take action against the army chief and later backtracking from its own support to the government "for suspicious reasons". He also urged the people to be aware of ongoing foreign meddling in Nepal´s internal affairs. He said the government will not bow down before the foreigners to rise to power. The outgoing prime minister said he has arrived at a conclusion to quit the office for safeguarding democracy and nationalism.